For some years now, I've been meaning to build a bicycle. Because I balked at the idea of owning more than one, I never did. Recently my unrestrained minimalism was given a reprieve in the form of cascading, terminal bicycle theft. 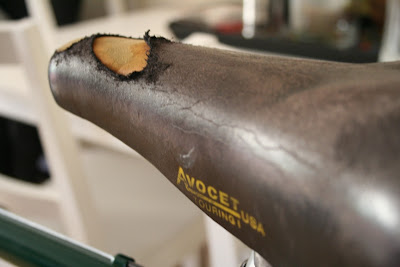 For five years, I've only locked one wheel on my trusty 1983 Nishiki International (this bicycle was actually named Super Famicom and the Crane Techniques). For some reason, the corroded spokes on the 27" wheels never seemed enough of a prize for thievery. Over time I even began to leave the rear wheel unlocked. Apparently either a downturn in the economy or my own luck was sufficient to leave my bicycle without a rear wheel one night.

I locked my limping ride to the rack in my apartment's parking garage. Upon returning two weeks later from the Igalia Assembly and the lovely Berlin Desktop Summit, I found my drop handlebars, stem, brake levers and brake cables Scrounging from wounded bikes is a gray area, it seems. In any case, it was decided: time to build a bicycle.

The process took a bit more than a month, though I worked only two or three days a week at it. My schedule generally followed the hours of the San Francisco Bike Kitchen, an awesome community bike shop bursting with incredibly knowledgeable volunteer mechanics and tools. I floundered a bit at first, because it isn't clear what order you should do things in, but the entire process went really smoothly.

Frame - I had a new frame, which was a kick-ass birthday present from Lauryn. New frames aren't always ready for assembly yet, you may need to face and chase them. Because of manufacturing tolerances and excess paint, facing and chasing prepares the metal on the ends of the headtube and bottom bracket shell. Amazingly, the Bike Kitchen had the expensive, specialized tools for this task. One of their mechanics also stood over my shoulder as I shaved bits of metal off of my frame. It reminded me a lot of the first time I installed a processor on a motherboard, hand shaking with the thought of destroying it. 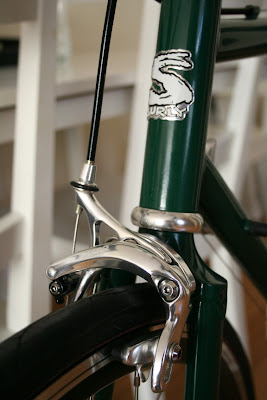 Fork - My frame came with a fork, but the fork itself was actually a lot longer than I needed. Cutting a fork at a bike shop typically costs about $50, but again at the Kitchen they showed me how to measure for the cut and guided me in the proper application of a pipe cutter. This was probably the second time I returned home from the Bike Kitchen absolutely astounded.

Measuring your fork can be a little tricky. At first I was under the impression that I needed the rest of the bicycle assembled to measure it. This isn't strictly true. If you know about how much of the fork you need, you can increase the measurement slightly. By moving the spacers around you can adjust the height of your handlebars up and down. It's important to remember that you can lower your handlebars on a long fork, but raising them on a short fork requires a steep stem or specialized adapters.

Headset - The headset is composed of the two little rings that sit between your fork and the top and bottom of your headtube. They have bearings in them, so that your fork can turn side to side. I made a mistake and started trying to assemble my headtube before cutting the fork. It was a lot easier once the fork was cut. There's a tool for pressing the headset cups into the headtube, it's like a very particular vice which ensures that they press in straight.

Bottom bracket - The bottom bracket is the spindle that the pedals rotate and the metal housing and bearings that the spindle rotates in. This was a fairly commodity part, though since I was reusing the crankset and pedals from my old bicyle, I had to be careful about what size I purchased. Against all odds I was able to combine information from old Siguino crankset brochures and Sheldon Brown to find the right size. This was actually a pretty simple process, but was made difficult by the font on the crankset which made "GS" look like "G5." I'm not the only one who made this mistake. 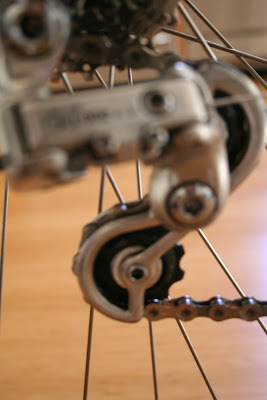 Once again, I was able to install these parts with the tools and assistance at the Bike Kitchen. A lot of the bicycle fell into place, after that. I installed the wheels next, mostly because I was tired of carrying my frame back and forth to the shop. I picked up used drop handlebars and a stem from there for eleven dollars For some reason, no one stole the seatpost and seat from my old bicycle, so I essentially plugged that in directly. At this point my work seemed deceptively like something I could ride. 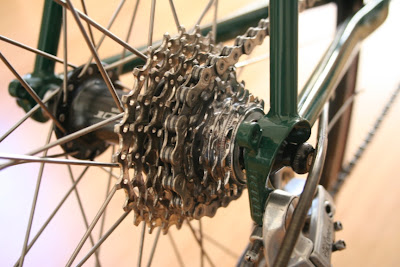 Next I assembled the rest of the drive train. Installing the rear-wheel cassette was simple with the right tool, which I purchased since it was only seven dollars. The difference between nine and eight speed chains tripped me up briefly, but was not much of an issue in the end. Once the pedals seemed to turn the rear wheel and the rear derailleur was adjusted properly, I installed the brakes, brake levers, and handle bar tape. Since that time, I have ridden it with only minor adjustments. 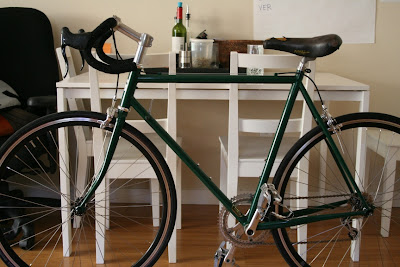